Here’s a list of people I think are bozos.
Or is it bozoes? I'll check with Dan Quayle.

The list will grow longer over time as I discover new bozos to add. My friend and fellow blogger El Guapo may also contribute to the list. If this turns out to be a popular page, we’ll consider expanding it to cover doofuses, numbskulls, and knuckleheads. For now, though, it’s just bozos. If you know some bozos you’d like us to include, nominate them in a comment below, or email one of us. Anyone can make or vote for a nomination, but we have final say. (And by we, I mean me.)

- Kids who wear their sweatshirt hoods on their heads inside a building, or on warm summer days. Especially if the sweatshirt isn't even zipped up.

- Guys with a huge whale tail spoiler on the back of their Mitsubishi. Or their Subaru, Hyundai, Toyota, Saturn or Yugo. Or any car, really. Unless it’s a top fuel dragster or Indy racer, it doesn’t need that stupid crap.


- Anyone who’s not in an Army or Marine combat unit, but likes to say “Hooah!”
Even if you are a bona fide combat troop, the only time you should be saying this is when you're about to charge a hill, or stab someone with your bayonet... at the very least, rappel out of a helicopter. Only a bozo says "Hooah!" in response to congratulations for setting up a computer LAN ahead of schedule.


- That dude in every college class I've ever taken who thinks we all want to hear his witty observations on everything except the assigned discussion topic. Please shut your ignorant, pretentious pie hole, ya big bozo.

As promised, here's an update with five more bozos. These came from El Guapo.

- The people on the highway who drive around the world to the left. You know, the ones that go 50 miles with their blinker on. We all do it every so often, but from Albany to Manhattan? Bozo

- Their equally bozo-tuous brethren that change lanes to the right, while advertising that they are going around the world to the left.

- Guys with ultra-loud lawnmower engines in their whale-tail equipped tiny cars. No, waking up the neighborhood to show off your Honda does not make you cool.

- People that insist on screaming at whoever the hell is on the other end of their cellphone. In an elevator or other small space. I'm looking at you, bozo from Dunkin Donuts.

- People playing on their phones. In their cars. During rush hour.
...

Today, I give you an update consisting mainly of nominations from readers who commented below, or ideas inspired by them. These certainly qualify as bozos.

- The guy who goes up to a three-legged dog's master and says, "Hey, you know your dog is limping?" Thanks for the tip, Bozo! I never would have noticed that.

- People who tell my wife, beautiful and perfectly sized at 4'10" tall, "Wow, you're short!" Wow, another thing I never would have known! Good thing we have bozos like you to point out obvious but irrelevant facts.

- At least three different people who, according to my friend who broke her ankle a few years ago, approached her to say, "Don't look now, but your shoes don't match!" No kidding? I wonder if it has something to do with this big plastic boot the doctor instructed me to wear for a month... if you hadn't said anything, I'd probably go throughout my day oblivious to the mismatched footwear. Thanks to your powers of observation, I can now take this off and replace it with my regular shoe... or maybe I'll get the doc to give me another boot, so at least both legs will match. Would that work better for you, Bozo?

- Guys with holes in their earlobes big enough to pass a cigar through. Or multiple facial piercings. Or tattoos above the neck. We know you just want to express yourself, and you think this style comes across as tough or cool or unique. It doesn't, though. It just makes you look stupid.

- Whoever stole my backpack out of my car last January, causing innumerable hassles for the next few weeks. I shrugged off most of what you took, because it's replaceable. But I've recently had a need for some important documents that were on the flash drive in that backpack. For causing me many hours of work trying to recreate my stolen documents, you win my BOZO OF THE DAY award. You're also a doofus and a giblet head, and I wouldn't be surprised if you have sewer breath.

- People that don't curb their dogs. Don't be surprised when you are woken up by a flaming bag of poo on your doorstep, bozo.

- People that park across two spots. You're getting off easy by just being called a bozo, but this is a family blog, so I don't want to be...clearer.

- People that sing loudly on the bus/train while wearing headphones. If you could sing as well as the act that recorded it, you wouldn't be commuting to work, bozo.

I'm lazy today and don't feel like writing anything original from my own brain. (There's a lot of this going on, eh Guapo?) But I can't just let the day pass without some kind of update, so I'm adding a bozo nominated by Sarah from callmequirky. Thanks for helping with the list, Sarah.

- Coworkers, especially those under our direct supervision, who can't seem to master the simplest tasks. We show them something over and over, they say they get it, we think they get it, and then they mess it up AGAIN. "Hey, bozo! Are you paying attention? I'm going to show you this one more time... never mind; why do I bother? You're never going to get it, are you?" It's like trying to teach a dog how to tie shoelaces.

We're due for an update, but I've been keeping busy with other stuff and have neglected The Bozo List for about a week. Thankfully, El Guapo stepped up and provided the following bozo nominations. I concur with every one of them.

- All the big box stores opening for Black Friday on THURSDAY.

- Anyone who has ever tackled anyone else to get the last Elmo doll on Black Friday.
- The TV announcers for the Macy's Thanksgiving Day parade. The parade speaks for itself. Stop telling us what bozos you are.
- The guy I'll be stuck behind on the drive home from my mother in law. Really? 3 lanes you're using? At the same time?
- Me for eating way more than I should, because my mother in law is a wonderful, inviting woman and A. Phenomenal. Cook. Sometimes I am such a bozo.

It's been about 3 weeks since the last Bozo update, but thankfully, a kind reader named Weenie Girl sent the following for me to post here: 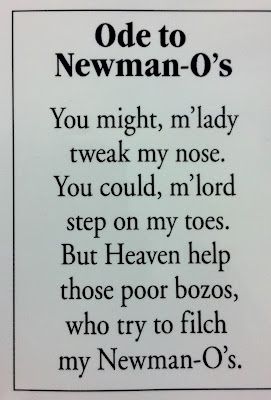 This was on the back of a box of Paul Newman's Newman-O cookies. Anyone who steals your cookies is truly a bozo!

Thanks for the submission, Weenie. More updates are coming soon--I promise!

Perhaps you've noticed something here, and you've been saying to yourself, "Hey, he used to add bozos to the list in groups of five. Now they're coming in one at a time." To that, I would say, "Very observant, dear reader. You're absolutely right. But did you also notice that I'm now including pictures?" Since this here's my blog, I'll do whatever I want with it. I may someday return to the former five-bozos-per-update protocol, but in the meantime, get used to it this way (and feel free to send in your nominations).

A few weeks ago I saw this guy walking on my college campus and just had to get a picture, because he belongs on The Bozo List if anyone does. 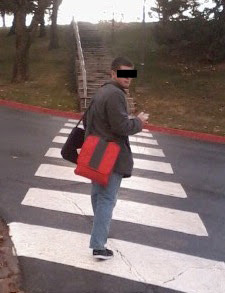 I have nothing against a nice man purse. I've been known to carry one myself from time to time. But two man purses at once? Dude! You need to get a backpack. Or fill up one of them and carry the remaining books loosely under your arm. Something. Just not two man purses.

I guess this list is overdue for some attention. Is 14 months between updates too long? May be a few hundred lifetimes for a Mayfly, but it's nothing at all for a Redwood tree.

I've added the following bozo nominations from Amy, with some of my own [remarks] and minor editing:

1. Guys with their jeans so low, we can see the entirety of their boxer shorts, and even some butt. [Who seriously thinks we want to see that? Nobody wants to see that, bozo! PULL YOUR PANTS UP!]

2. Evangelicals who claim that God is "theirs" and everyone else is going to hell. Get over it, Teebow. Jesus said LOVE. He also said not to make a big freaking show out of your works, like Teebowing at the touchdown. [Nothing wrong with loving God and Jesus. In fact, it's sort of a commandment in my faith. But none of us has a monopoly on how to properly express this love, and I'm pretty sure doing so through extravagant public displays is not appropriate.]

3. Women who use too much perfume AND take the elevator I'm on. Barf. Ditto men who are hooked on buckets of Patchouli aftershave. Double barf. [I have to admit to being sort of a bozo here. One of my coworkers discovered that a lady in the office down the hall (whom he enjoys taunting) HATES Old Spice. So, naturally, he brought in a big bottle of it to apply liberally every day. I sometimes join him, because I LOVE Old Spice. When it runs out, we might switch to Hai Karate or Aqua Velva.]

4. Poets who think free verse is lazy. They obviously fail to appreciate Amy's brilliance! Harrumph. [Free verse is often done lazily, just as rigidly structured poetry can be stale and trite. Done well, either form can be beautiful and inspiring.]

5. Parents who withhold child support to punish their exes. [Really, people! You've gotta take care of your kids. If that means sending money to the ex, do it! I don't care how much you dislike him or her--do it for the kids, bozo!]


Thanks for the submission, Amy! For those who've not had the pleasure of reading Amy's poetry, she is talented and very prolific. She also believes strongly in some important causes, and although I don't always agree with her views, I certainly respect her devotion to them. You can read her stuff here: Sharp Little Pencil.

Time to add another bozo: the train driver I crossed paths with yesterday. That's right; you, Mr. Honky-Pants, are the latest inductee into this exclusive group. 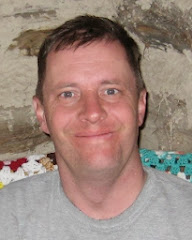